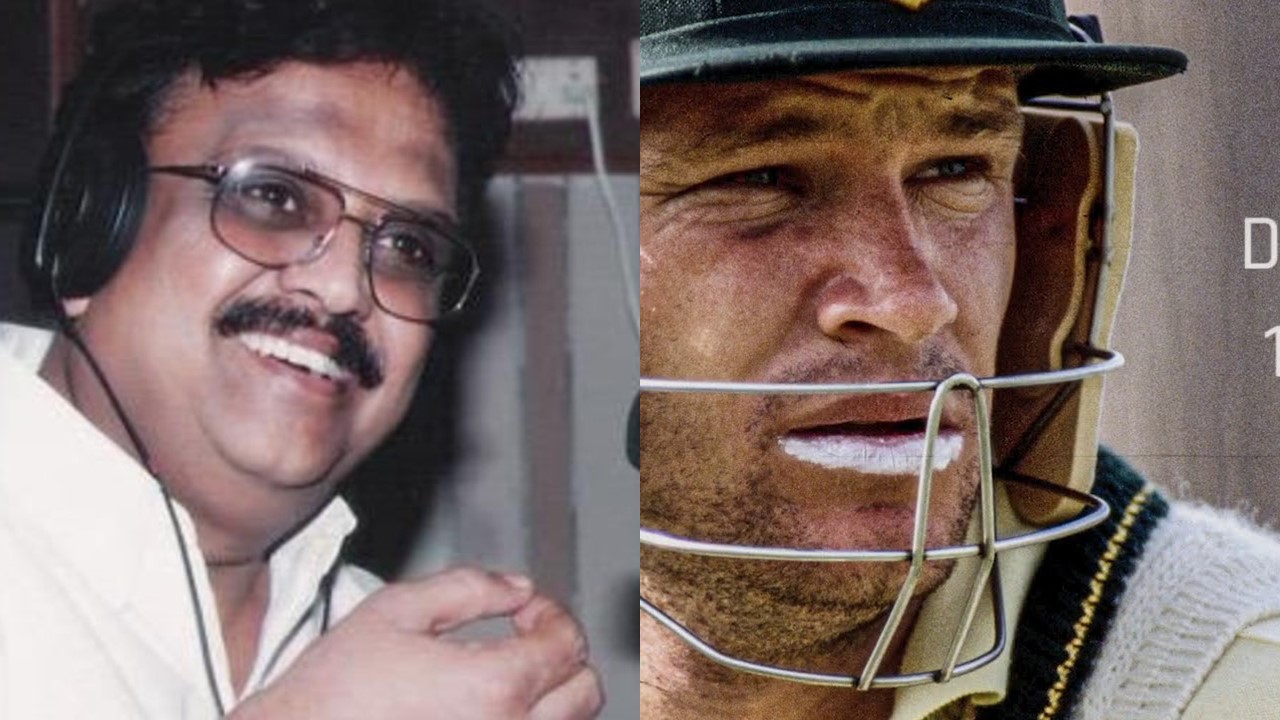 First of all a big thanks to Venkat @ TNHSS who along with Naga encourage me to keep writing. Since past few weeks I have been trying to set up a vintage Amplifier and gave blog a miss. Venkat reminded me yesterday that I have not penned a tribute to SPB. Thanks Venkat

In the eighties I was working in shifts in a paper mill in Pune. Working in shifts provided an advantage to watch sports during day time (this was before day/night matches) especially if I was doing night shifts. The downside was if India won, I would be excited and would not go for the shift in the night and if India lost, I would be so upset and miss the shift earning the wrath of my boss Mr. Lobo.

So it was with lot of excitement I was waiting for the 1986 India Australia series which was to start in September in Chennai. Chennai was a lucky venue for India and more so for my hero Kapil Dev (Happy Birthday Kapil Blog) who had already played some spectacular innings in Chepauk. I was hoping that India would start the three test match series with a win.

One Australian player though, had different ideas. Promoted to one down, he played an innings of his life in only his third test. He played for more than eight hours, got dehydrated but clung on. Playing in the heat of Chennai requires Himalayan stamina. I going to digress a bit here, but it’s worth to understand the relevance of the heat in Chennai, it does not matter whether it’s January or May or September.

Mohan is back from UK and he has acquired this habit of talking about weather (a typical Englishman trait), and starts complaining about the heat and humidity everyday. My stock answer to him goes like this, “I don’t understand what are you talking about. I live in a pleasant 24 degree weather all the time.” The corona has forced to people to stay indoors and you live with the air-conditioner on all the time.

I consider myself to be little environmentally conscious. I recycle/reuse stuff, conserve water. Don’t drive unnecessarily. But there is one exception which I explained to Mohan. “I can follow all the suggestions for helping the planet to remain green except one. Even if this is going to cause an huge hole in the already depleted Ozone layer, I will not switch off air-conditioner for more than 3-4 hours a day. I just can’t imagine working/sleeping without air-con.”

That’s the heat in Chennai and that’s where Dean Jones played the innings of his life. In a recent interview he said, he could not recollect anything after he scored 120 runs. Border, the captain, kept motivating him and Jones eventually got out for a well made 210.

You can watch Dean Jones talking about his innings and tied test here https://www.youtube.com/watch?v=1mzkoh59NOA:

I was watching all his suffering live on TV and was hoping he would get out, India would bundle out all the remaining batsman, score fast, bowl them out again, and win the match handsomely. None of which happened except my hero Kapil Dev scored a century and the match ended up in a tie.

The ‘tie’ is very significant. Of all the 2393 test matches played till date from the inception of test cricket in 1877, only two matches have ended in tie. A tie is same scored made by both the teams after all four innings are completed. The first tied test happened in 1960 (test no 498) and the second one in 1986 (test no 1052). Dean Jones was the man of the match for Australia and Kapil for India. There is no tied test since 34 years todate.

Dean Jones was one of the great test players to have come from Australia but he found more fame in the One Day format. He was one of the pioneers to score quickly (the essence of one day cricket) and revolutionized running between wickets. He ran like a hare after hitting the ball through gaps.

Dean Jones became famous in India as he was one of the early ‘India adapters.’ There was a time when players from the Australia and England did not like touring India (except when it was absolutely necessary) and most of them moaned about lack of facilities from players lounge to hotels to potable water. All that changed when India became the biggest money spinner in World Cricket. Now every player from these countries spend lot of time here most of the retiring cricketers look for some form of coaching assignment in IPL (very lucrative indeed). One of them is even conducting cookery shows from small towns of India.

Dean Jones did not find himself endearing to Australian Cricket Board. So he became a commentator and expert analyst and Indian TV channels roped him. He used to wear a comic gown, called himself professor Dean and predicted on a blackboard what would happen in the match next day. He became quite popular even after his unfortunate utterance about Hashim Amla on live TV. I am sure that was unintended, he being such a nice bloke but paid a very heavy price.

One saw/heard Dean Jones during every IPL season. His affable nature and light witted comments about the game made him famous and fans loved him.

I was shocked when I first heard about his sad demise due to a massive heart attack while he was on IPL assignment in India. You don’t expect great sportsman who are in good shape to die so young. You get shaken to the core.

Professor dean of the double hundred entertained millions of fans during and after his playing days. We will miss you. RIP

In the summer of 1981, my cousins from Mumbai (Bombay then) descended on us, to spend the holidays with us, a yearly ritual.

We had moved to a new house in Chennai in the same locality and I acquired a friend Shakespeare Ravi. Unlike all of us in my friends circle, Ravi could read and write in Hindi. One day he started playing some Hindi songs (I think from a tape) and played on his bongos (another talent none of us had, playing a musical instrument). The Hindi songs drew my cousins to the balcony and they started going ga ga over the numbers. The eldest among them made this comment. “Ramesh you know this singer SP Balasubramaniyam? Amazing voice.”

The movie was Ek Duje Keliye (We are made for each other), a remake of massive hit Maro Charitra in Telugu and the song was ‘Hum Tum Dono Jab Mil Jayen.’

She was not aware of SP Balasubramanyam and I was not aware of his Hindi debut. SPB as he was popularly known is one singer we were growing up with, actually we were the second generation who hummed his songs on the way to school or college or office or in the living room or bathroom (depending on one’s talent and confidence).

The movie was a pretty pedestrian one (massive hit though) and the original ‘Two States (Chetan Bhagat) minus IIM.’ Boy from Tamil Nadu meets a girl from Uttar Pradesh (or one one of states from Hindi heartland, romance ensues with lot of songs and lot of opposition from parents and die at the end of the movie a la Romeo & Juliet. When the movie was being reproduced in Hindi, the music composers were not keen on having SPB as the singer as he had southern accent. The director was adamant saying anyway the hero is a South Indian so let him have a playback singer who has similar accent.

That proved to be a masterstroke. SPB won the national award for the best singer and successfully transitioned to Hindi movies from south the first one to do so.

Comparing SPB’s records in singing to other singers would be akin to Comparing Sachin Tendulkar’s records to Club Cricketer’s achievements. A friend of mine sent this yesterday.

I can’t really think of anyone in my generation who would not have hummed few of SPB songs. And to know that this is not limited to Tamil language shows the immense popularity of the singer.

SPB first burst into Tamil film in Adimai Pen playback singing for MGR the most popular hero of Tamil Cinema. This was in 1969. For the next fifty years he sang for every popular hero in South Indian films and for some in Bollywood. He sang in 16 languages recording more than 40,000 songs a Guinness record and that’s more than a song per day throughout his career.

For me, the ultimate compliment for his singing came from a fan and not from the industry. In 1981 a Tamil film Alaigal Oaivathillai (The waves don’t stop) became a super hit and one song – aayiram thamrai mottukale (A thousand lotus buds) was hummed by all. A fellow trainee in an Audit Firm, told me he spent ரெண்டு தொண்ணூறு Two Ninety or more precisely Two Rupees Ninety Paise (the highest denomination ticket in the best cinema in Chennai) just to watch SPB’s song. Two Ninety is a princely sum in those days and more than half day stipend for us. And this trainee watched the movie half a dozen times only to watch/listen to SPB voice. That’s some love and affection for a favourite singer.

SPB was not popular just for his singing. He was loved by everyone. The producers, the composers, the heroes for whom he sang. In a predatory industry where one blocked others from becoming successful to ensure his/her own survival, he was more than generous to help every budding singer.

His simplicity and his respect to his peers was just as amazing as well. Every evening when I was flipping channels endlessly to the constant irritation of Renuka, if I saw SPB in a music program, I stopped flipping to listen to his magic voice and kind words.

He took to acting much later in life and brought the same simplicity to his acting performances as well. In Tamil movie industry where overacting is the norm, who could make even Kamal Hassan overact, he remained a natural.

Almost a decade before Mahadevan performed a breathless song, SPB sang one in a Tamil Film Keladi Kanmani. You can listen to the song here: https://www.youtube.com/watch?v=NaNpo6y26j8

A year ago I met the singer on a flight, and said, ‘Hi Sir How are you?’ He replied with his trademark smile, a smile which would remain with me for a long time.

Sripathi Panditaradhyula Balasubrahmanyam,or SPB is more than sum of the record number of songs or the dozens of awards he won throughout his career spanning five decades. He respected his peers and in turn was loved by everyone including the millions of his fans. SPB Sir, a great singer and a greater human being we will miss you. RIP

This is my favourite SPB song. Guess the female voice? The great Lata Mangeshkar

5 thoughts on “A Double Hundred and Two Ninety. Adieu Dean Jones and SPB.”