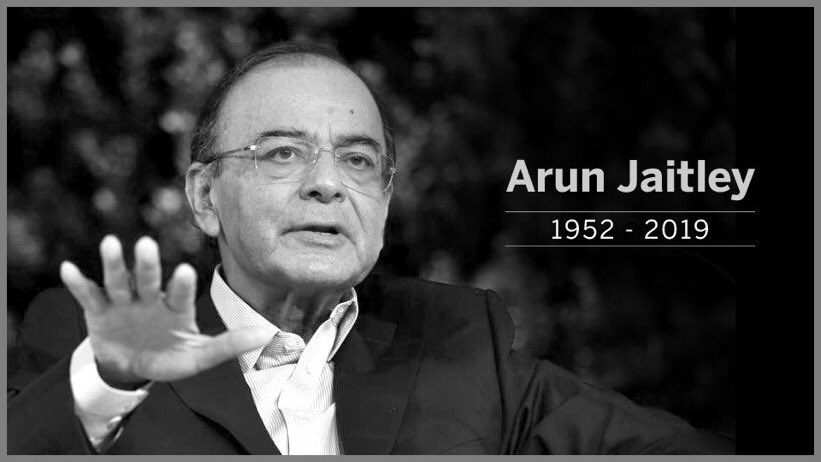 Arun Jaitley was probably the chief influencer for millions of Indian middle class, especially the English speaking ones, to become followers of BJP. He was well educated, a very successful lawyer and spoke more like a CEO of a large corporate than a street smart politician.

Arun Jaitley was a student leader and a great orator. He was jailed for eighteen months during emergency. The student leaders of yore were mostly left leaning intellectuals but Jaitley was different. He went to elite schools, graduated top of the class, passed the bar exam and became one of the leading luminaries of law in India before becoming a full time politician. He was so successful, it must have been difficult for him to quit his thriving practice when he became a minister. He quipped, “Everyone talks about the amount of money a minister would make in India. Well I will be losing more than that as I have stopped practicing law.” When he was made the additional solicitor general of India in 1989, he became the youngest to get the coveted post.

Between 2009 when he was made the leader of opposition in Rajya Sabha (the upper house of parliament) and 2014 when BJP won the election, he made life miserable for the ruling party inside and outside of Parliament. His speeches inside the upper house were made with lot of conviction and facts of law. The ruling party would sweat whenever he rose to speak. It was never easy for anyone to take on him.

Outside Rajya Sabha, he was almost like a movie star with everyone of the two hundred TV channels mobbed him as he came out and wanted a sound bite from him in English or Hindi and he was articulate in both the languages.  BJP was known more as a Hindi speaking party and close to trading community. Jaitley broke the image; he would talk on any subject at length and convinced the millions who were glued to the TV why BJP was right in taking the particular stance and how they would do things differently.

He was one of the chief architects in helping Mr. Modi to become the Prime Minister of the country. Even when Mr. Vajpayee the then Prime Minister wanted Mr. Modi to quit as the Chief Minister of the state after Gujarat riots, Jaitley sensed people’s mood and ensured that Mr. Modi did not have to leave. He helped in forming most of the strategies when Mr. Modi put his hat in the ring to become the PM after 2014 general elections.

He was articulate and affable and won respect from everyone across the political spectrum. These qualities combined with his legal knowledge helped him to get two of the most important reforms passed during his tenure as the Finance Minister of the country; the indirect tax reform (commonly known as GST and the bankruptcy code). Just imagine the challenge if you have to convince every single chief minister of the twenty five odd states in India to pass the GST bill. The GST is still a complicated bill and a lot more needs to be done before it becomes the greatest reform India will see. But for Mr. Jaitley the introduction of the bill would have got delayed at least by a few years assuming we would get another Finance Minister who would have all the qualities Mr. Jaitley had. I am sure Mr. Jaitley will be remembered for many years for introducing the GST bill and will remain his largest contribution in reforming the antiquated indirect taxation of this counry.

Mr. Jaitley was a cricket buff and served as the head of Delhi Cricket Association for few years which brings another dimension of Mr. Jaitley’s personality and character. He was accused of impropriating the funds of the association by the Chief Minister of Delhi. Mr. Jaitley filed a defamation suit and Mr. Kejriwal had to eat the humble pie when it was established that the accusation was false . Mr. Jaitley did not gloat over this; in fact, he did not even speak about it, a rare quality for a politician in India.

If it was any weakness in Mr. Jaitley’s functioning, it was his belief that everyone would act with a sense of responsibility and commitment to their jobs. Unfortunately, he grossly overestimated the virtues of Indian bureaucracy.

Last month, we lost another leader Ms. Sushma Swaraj, the former external affairs minister of India, a great woman and a leader par excellence and who had a connect with the citizens of the country especially the ones who are settled abroad. Yesterday we lost Mr. Jaitley; both were of similar age and were very popular and I am sure would have continued to contribute a lot in making a modern and powerful India.

Both Ms. Swaraj and Mr. Jaitley declined from contesting the election this year sighting ill health, a rarity in Indian politics. But what they did after that, is what making me and millions like me to think that India is surely on the right path towards progress. Both vacated their official bungalows (a great privilege if you are in Delhi) the day the new ministry took oath. Both were powerful leaders and both were suffering from serious illness and no government would have asked them to vacate their official residences forthwith. But for people like Mr. Jaitley probity in public life is the essence of their existence and thus did not even wait for a day before moving out.

Affable and articulate, a man with one of the best of legal brains of this country Mr. Jaitley was more than just a leader. He won friendship from everyone even from those, who were his harshest critics.