We all have our favourite who is a better sportsman fights. Gavaskar or Viswanath? Sachin or Dravid? Schumacher or Hamilton? Borg or McEnroe? Sampras or Agassi or for that matter Fedex or Nadal? When we are young, we try to find reasons to justify our favourites in all possible ways. And one such argument put forward my friend Shivaji’s (VII A Vs VII C – My First Cricket Match) brother takes the cake.

Before the Borg Vs McEnroe arguments, our (in)famous fights were always between Gavaskar Vs Viswanath. Gavaskar was purists’ delight. Impeccable defence, on drives, which even the angels would descend on earth to watch. And Viswanath who played the most elegant of square drives and late cuts, which he could play as late as when the ball was almost in wicket keeper’s hands. Gavaskar scored more runs and centuries and Viswanath built a reputation as crisis king and a the unique record, when he scored a century, we either won the match or managed a well fought draw.

But Viswanath had more failures and got out when we needed him most. So the endless arguments who was better? We used to rattle out statistics on how many games Gavaskar had saved and how many times Vishy failed us. When the arguments got out of hand, Shivaji’s elder brother would come with this gem – ‘எங்களுக்கு என்ன captaincyயா கொடுத்தீங்க?’ meaning ‘did you give us (me) captaincy. We will play only this much.’ Though Viswanath was senior Gavaskar was awarded the captaincy first which had upset Viswanath supporters. And we all know what happened when Vishy was made captain. He recalled a Bob Taylor after umpire gave him out, (when India was in a strong position), and Ian Botham used the opportunity and won the match. Viswanath was criticised for the decision, though he later said it was a collective decision.

But logic and reasoning did not play major role during those fights when we were kids. It was the passion and the urge to win the argument which played a major role.

We would not resort to these tactics when we are grown up, but use our knowledge, statistics and wisdom to support our heroes. Of course there are some exceptions; the senile (nothing good ever happens), the stupids and the silly ones. And Sanjay Manjrekar, the cricketer falls into the last category. I will explain.

First the court scene from Hollywood movie ‘A Few Good Men.’ Two marines are under court-martial, facing a possible death sentence. The two lawyers arranged by the court are rookies. Tom Cruise and Demi Moore do not have any material (witness or otherwise) to defend the marines. They decide to put the senior most Marine, Colonel Nathan R Jessup (played by Jack Nicholson) and provoke to him to admit the truth.

Tom Cruise asks some uncomfortable questions and declares the colonel was responsible. The prosecution lawyer Kevin Bacon immediately objects to Tom Cruise’s comments and says, “Lieutenant Kaffee’s intention is the smear a high ranking marine officer in the desperate hope that the mere appearance of impropriety will win him points with the court members. My recommendation is Lieutenant Kaffee is severely reprimanded and the witness is excused with court’s deepest apologies.”

Either Sanjay Manjrekar is yearning for some brownie points by smearing mud on some of the greatest cricketers India has produced hoping this will get him more viewership and make him famous or he treats those players like undesirable daughter-in-laws.

I agree everyone has a right to his/her opinion. That’s why I put Voltaire’s famous quote, “I do not agree to what you have to say. But I will defend to the death your right to say it” as the featured image. Manjrekar has a right to say what he wants. The problem is where he says this. If he writes a blog or tweet or even write an op-ed to convey that Dhoni should not have played any cricket even in school, that is his right. He has the right to say this and I have a right not to see the tweet or read the blog. But the problem comes when he rants his opinions while doing commentary masquerading as expert commentator when the game is on. Here I don’t have choice. Commentary is done to let the listeners/viewers know what is happening on the ground. The commentator has the right to air his opinion if some player is not playing as per the demand of the situation. But to question their integrity or intent or their capability is taking things too far.

He started this during the final years of Sachin Tendulkar’s career. He kept repeating all the flaws of Tendulkar’s batting and kept asking why is he still playing. Since last two years he has taken on Dhoni. Last time, when he was airing his so called expert opinion, I  texted my friends asking these so called experts who question Dhoni, what were their strike rates and how many games did they win on their own. Even if put all of them in one group and Dhoni on the other, they could not match his average or his single handed wins. Dhoni’s career strike in ODI is close to 90 and Manjrekar’s is 63.

Mr. Manjrekar is trying desperately to surpass the low standards he has set for himself. When India was batting against Bangladesh, I listened to the following. Rishabh Pant was playing and scored a hat-trick of fours just after India lost a couple of wickets. Harsha Bogle commented Pant would play like that whether score is 120 for 3 or 0 for three. Few minutes later Mr. M observed that Pant played/defended a ball as he was nearing his fifty. In the next over Pant got out hitting a ball and missed on his fifty. Manjrekar was quick to comment, “I am not sure why Pant played that stroke. May be what is happening on the other end must have influenced him.” By other end, he meant Dhoni who had just struck a boundary and playing well. So there was no way Dhoni is putting pressure on Pant to score fast. Tell me where is the need or what is the reason for this comment except that you want to pin everything on Dhoni. Ridiculous to say the least.

Yesterday, the TV was flashing Rohit Sharma’s average in the World Cup (90 or 91). His immediate comment was this average is not because of not outs. Again he wants us to think that the inevitable. Dhoni’s high average is because of his not-outs while Sharma’s is because of his high scores. Even a half-baked nitwit would know if you are opening the innings you would always get out by the end of the innings (Rohit) and if you coming down the order your chances for remaining not out in a one day game is higher because you would face only a few deliveries. So what was he trying to imply.

Then his rant on Ravindra Jadeja. He called him a bits and pieces cricketer. While he has not contributed enormously with the bat, Jadeja has become top rated bowler in test cricket, a decent bat and an excellent fielder. For Mr. M, Pandya who has played just a few games, is a great all-rounder like Kapil or Botham but Jadeja is just a bits and pieces cricketer. It does not matter to Manjrekar how many cups Jadeja has helped India to win.

Personally, It is a big disappointment for me. I always liked cricketers from Mumbai (CSK Vs MI not included). They are the most disciplined cricketers and always grabbed the chances they were given. As corollary, I took the Sunny Gavaskar side against Vishy. And thus Manjrekar remained in my favourites list. Anyone who scored a century against the fearsome West Indies in Bridgetown Barbados or the powerful attack of Aussies in Perth is a definitely a great player and Manjrekar scored a century against WI in the 1988-89 tour facing Marshall, Ambrose, Walsh and Bishop. A friend of mine who had a common friend with Mr. M told me this afterwards. After the tour was over, Manjrekar told the common friend about his century, “I could not see the ball for the first half an hour. It was just luck.” Of course it was no luck, Manjrekar was indeed a great player of pace bowling.

When he switched over to commentary, I genuinely thought he would bring in a breath of fresh air and he did. But somehow he seemed to have lost that and his only desire now, seems to be scoring brownie point or win a Twitter battle. His career was long over before Sachin and Dhoni became household names in India and widely popular among millions of followers worldwide. So he can’t aspire to become as famous as them. So why not score a few headlines as Kevin Bacon put in “A Few Good Men” or find faults with everything as a mother-in-law would do with a daughter-in-law.

I am not saying commentators should say only good things about players. Boycott used to comment many times, “My grandma would bowl/bat better than this.” It was always made in lighter vein. Mr. Gavaskar never hesitates to point out mistakes and he is very severe on bowlers who bowl no-balls or the frequent drink breaks the players take these days. He would also question the commitment of few players for e.g. Munaf Pate’s fielding efforts. But there was never any personal animosity against any of those players and when Mr. Gavaskar, the doyen of modern Indian cricket, spoke people listened. Sorry Mr. Manjrekar you are not in Mr. Gavaskar!

I feel that Manjrekar is either looking forward to some notorious popularity or he thinks his job entitles to say anything he pleases. After all, he is not going to feature in photographs like these. 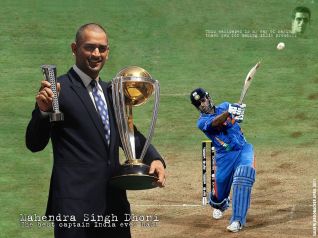 Sachin going out to bat for the last time, an award winning photo (L) and Dhoni scoring the wining runs and with the World Cup (R).

Talking of Dhoni, today 7th July, is his birthday, a date, my two year old grand nephew – Raghav, shares with the Captain Cool. Happy birthday wishes to both.

As I was writing the blog, I was thinking about who could be my World Cup team. I put a rule that only world cup winning players would feature in this. So Botham of England or Martin Crowe of New Zealand or AB De Villiers of South Africa are not going to feature in this. My choice of eleven or rather twelve is as follows. I have put a spinner as twelfth man so that if we can include him and leave out a pace bowler in a spinner friendly track. This is my first list and I have not done any research to justify my list. So I request dear readers to send them their list and we friends can make a final one.

Four of the batsmen have scored centuries in the finals (Gilchrist, Richards, Ponting & De Silva). And we have listened to commentary when Garner delivered those yorkers in 1979 final and saw Wasim Akram’s famous spell. And Dhoni is my choice for ODI captain. Any Suggestions??

7 thoughts on “Did You Give Us Captaincy?”