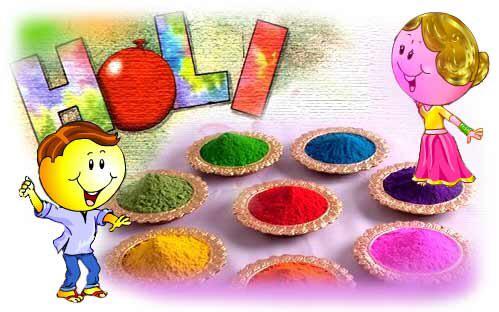 To Vaibhav and Saurabh, who taught me the significance of the festival and to all other friends who are celebrating the festival today.

As soon as I fired my laptop yesterday, my Calendar app popped to say, Holi Holiday tomorrow. It was the first time in many years (since 1984 to be exact) no one has spoken to me about the festival or asked me for leave to celebrate it. In Chennai where I have been spending some time in the recent months, holi is still restricted to few pockets of the city like Sowcarpet where people from the north of the country live just like Hindi movies were restricted mostly to ‘Star Cinema’ in the sixties and seventies.

My first experience of the festival of holi was from the movie ‘Sholay’ which I saw as a kid in the seventies. In the song ‘Holi ke din dil khil jaate hain (on the holi day the heart blossoms,’ the entire ensemble of actors (barring Jaya Bhaduri) would throw colours at each other and dance. Since I did not understand a word of Hindi those days, nothing registered in my mind, except, at the end of the song, Gabbar Singh’s henchmen would invade the village to plunder, pillage and take prisoners. Here is the song:

It was only after I migrated to Pune, I was forced into this colour throwing celebrations and I hated it. I still remember the first Holi, when I was forced out of my sister’s house by the neighbours to be a part of this strange act. They applied colours all over my face and poured water on me. I protested, uttered a couple of harsh words in English and ran back inside.

Pudumjee Paper Mills where I started my career provided the ingredients free of cost to all the revellers. The dyes, (Methyl Violet and Rhodamine mostly) that were used for paper-making were taken out of the mill and everyone had plenty of colour concentrates – enough to spoil everyone’s skin and dress for the entire city.

It was also the time when Delhi became notoriously known for making the girls go through hell under the pretext of playing Holi. The morning newspapers after the Holi day, were filled with horror stories how girls were harassed against their will and subjected to humiliation (I am recording things little mildly here). So my dislike for the festival grew even further. I avoided being around during the festival, travelling to some city in the south of India to escape these forceful display of love and festivities.

Cut to few years later, it was ironically in a dusty village in Andra Pradesh, now Telangana, where I was caught once again on a Holi day which changed my thinking a bit. I was taking a trial in a ITC paper mill during Holi time. In the morning I came out to make a phone call from the STD booth. A manager of the mill called me out and asked me to join this, well colour and water colour splashing. I just protested a bit but could not force what I thought about the whole thing to a customer. Vaibhav, a colleague of mine in Nalco, was with me and he asked why was I making a such a fuss. I told him what I thought about the whole thing and quoted the horror stories I used to read in Newspapers.

“Holi” he said “is an ancient spring festival and is celebrated widely across the sub-continent. It has religious significance as well. The first day of the festival is Holika Dahan (burning of demon Holika and the second day is the Gulal (colour) festival.” I was convinced a bit and participated half heartedly in the festivities in the paper mill colony.

After the trial we went to North India for another trial and since it was a weekend, Vaibhav asked me to come to his native place Dehradun from where Mussoorie was a short drive. I could see the after effects of Holi in the city and during the drive to Mussoorie (colours splashed everywhere). It was also the first time I saw the majestic Himalayas and got introduced to the famous Holi concoction ‘Bhang.’ Bhang is a drink which is laced with cannabis and if you drink a couple of glasses you will end up walking like a zombie for a week. The Bhang is prepared and drunk during Holi mostly by the menfolks.

Festival during spring time also made some sense. Madras where I grew up had only two seasons hot and very and two and days of winter (if you can call a couple of degrees drop in temperature – winter) thrown in between. But the North of the country would be slowly coming out of harsh winter and the period before they get into scorching summer provided the best weather for the festivals.

Rachna grew up in Pune for few years. She would go out to play with her friends, come back drenched in colourful water and colours splashed all over. Her appearance would be something like this after her play.

The gun which is used to spray coloured water is called pichkari in Marathi which sounded, to me, ‘pichakari’ (beggar in Tamil) and I would tease Rachna that she looked like one. Cleaning her up would make her mom tired, but it was real fun for the kids. Over the years the colours have become more environmental friendly and I believe, nowadays, only organic colours are used. A small consolation.

It still is one of the biggest festival in India and here is a toast of Bhang to all my friends who celebrate ‘Holi’ today.