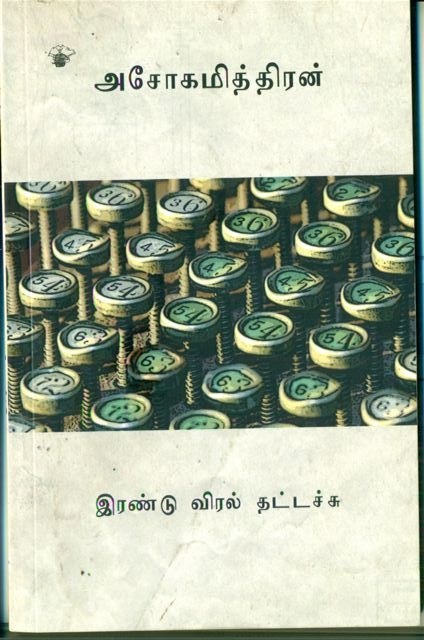 Asokamitran first appeared here in What Should I Tell Father – Asokamitran. He is known for his simple style and prose. He does not waste too much time in description and commentary. Just a word or two and he would go straightaway into dialogues.

This is one of my favourite stories.

Nizam Railways used to sell thirty to forty year old products as ‘condemned’ at whatever price they could get. My father bought a huge table at one of this ‘sale’ and the table occupied half the room. The table came with four chairs, each one a different type and character. One chair had to be rested on the wall otherwise whoever sat on it would fall back. A courageous man must have sat on it in father’s office. One fine day two people carried a huge wooden carton and asked us where should they keep it.

Mom and I asked them what was that and they replied they had no idea. Only sir had asked them to deliver it at home.

We told them to keep it on the table. The box was very heavy. I brought a screwdriver and opened the top. There was a typewriter inside the box. I was confused as to how to take it out of the box. When father came back from office we told him about the box. He said, “I only bought this.”

“You are filling the house with old and useless junk.” mom commented.

“What can we do if you buy useless things only because they are cheap?”

“This will be very useful at home.”

Mother stopped talking. She must have felt something. It’s just not the typewriter, all the useless junk sold in auction and the item thrown away by others filling up the house must have caused a fear in her heart.

Father opened the box leisurely at night and commented “it is already open!” He took a huge breath and took the typewriter out of the box. ‘Remington Rand 14’ was written at the back of the typewriter. Now both the typewriter and the box were filling up the table.

“Get a screwdriver” he told me. He dismantled the box and asked me to keep it in the backyard. The box was made without screws. He inserted couple of sheets of paper in the typewriter and started typing.

“When did you learn typing?”  I asked him.

“Only after coming to this city. If I had not learnt it, I can’t say we can get a meal even once in a day.”

“I will also type a few words.”

“Don’t put too much pressure on the keys. It’s like a baby. There is nothing in the world which is as useful as this.”

That’s how a typewriter came into our house. I felt father bought such a huge table only to keep the typewriter on it. Even after he taught me for few days, I could type only with two fingers. Father got angry once and commented, “the way you type, no one will give you a job.” I tried as much as I could, but my pinky and ringer fingers stood erect forcing me to type only with two fingers.

One day when he got back from office he told me, “Get ready. We are going to the institute.” I knew the railway institute. It had two large rooms; one had a huge tables on which magazine would lie scattered. There were cupboards by side of the walls which were filled with thousands of books. The other room had a billiards table. The people in the room, whether played they played the game or not, but would keep smoking non-stop. During the Christmas week, they would remove all the tables and cupboards, decorate every nook and cranny in the room and get it ready for the dance. A band with ten or twelve musicians would play in the verandah; soldiers and non uniformed officers would dance inside the room and in the adjacent garden. In an English movie those dances would look great. I was a small boy then and could not understand a lot of things. The soldiers would not come near ladies who were black even if they were handsome. Their dance would look barbaric. But on the Christmas eve, they would behave as if they had just descended from heaven and treat the black people badly.

But father did not go near the institute. Instead, he went towards Maradpalli. I knew many people there but never seen my father going there even once. I understood father was not a big fan of rich people and did not believe them. His closed friend was the owner of Mohammad Usman store, Mr. Mohammad Ghouse. I have been to his place many times.

Maradpalli had nicely constructed houses but none of them had two stories. They were all at ground level. One house looked as if it was constructed only with black stone and I was hoping father would go inside that house. But he entered a house at the end of the street.

The houses I visited in Maradpalli always had a rangoli outside the gate and one inside just before the main door. The one father went did not have any rangoli. The lights bulbs glowing inside were very dim. Father called out, “Mrs. Simpson.” No one came out. Father called again.

A girl dressed in a frock came out. Generally we called frock, a gown.

The girl went inside and moments later, a lady in frock appeared. Even in the darkness, I could see she was black. She lifted her face and asked, “who is that?” Father told his name.

“Oh!” she let out cry, came near father and hugged him. “How many years have passed since I have seen you. I thought two or three of your boys died young.”

“This one survived” my father told her. “How are you?”

“Income and expense always have a tug of war” she replied.

We went inside the house. The hall was very small. A table, a chair and a mattress was rolled and kept on a bed.

My father asked her, “Is this not your place?”

“Yes But I am also working as a security guard. Why did you not come before. I have all these because you took pity on me.”

Father did not listen to her, “can we go inside and talk?”

The next room had a big table like the one we had. There were four typewriters on the table but no one was typing.

“Margaret!” she called out.

The girl who we saw first came out.

She told Margaret, “tell them we have guests.” She turned towards us and said, “all are girls. They should know I have guests.”

‘Come in’ we heard a voice from inside. We three went inside a small room. There were three beds in a line. All had mosquito nets. In the next room also had three beds.

Father asked, “who so many beds?”

“All are girls from villages outside. They all can learn secretarial work here. In three months I send them for an exam. Then I give them some training. Food, accommodation and training all cost about forty rupees. Do you think it is OK?”

“I think it is.” father replied.

“I keep only girls. There are some concessions but some dangers as well. I don’t enrol drunkards’ daughters. They won’t pay. The girls would look pity. But if I take them, their fathers wont pay. They would drink, come and shout at me. One drunkard said I am running a brothel here. Is it not enough I had enough from one drunkard?” Mrs. Simpson started crying.

Father asked, “No news from Simpson?”

“He ran away after giving me his name. I heard he is Calcutta.”

Suddenly Mrs. Simpson started laughing. “A king gave his throne for a Simpson. Here the king has ran away from a Simpson.”

The girls were looking at us. Father told Mrs. Simpson, “let’s talk in the front room.”

We sat in the typewriter room. A girl bought some biscuits. Father said, “We don’t want coffee or tea.”

Mrs. Simpson looked at me and said, “all these typewriters were bought at thirty and forty rupees thanks to your father. Without your father’s help I would be begging on the streets now.”

Father said, “Simpson was working with me.”

“What work? He left me a destitute. Why should I talk about it now?”

We started to leave. Mrs. Simpson said, “you should come again. Hey you come during typing class hours.”

We walked in silence for few minutes. Father suddenly said, “There are no institutes for boys like this here.”

Father did not respond. I asked him, “Mrs. Simpson talked about a King and Queen. What’s that about?”

Oh that one? Do you know who is the King of England now?”

“Before him there was a King name Edward. He said he wanted to marry someone. But the Parliament did not approve. He told them I don’t want to be a king and abdicated. That lady’s name was Mrs. Simpson. That’s how George the sixth became a king.

“Did you get her all the typewriters as the lady said?”

“Yes I did. She is running the institute well.”

“He is a railway guard. She did not know something. Simpson told me that he was leaving for Calcutta.”

I did not join any institute. In two months father died. All the tables, chairs and the typewriter went outside. But the habit of typing with two fingers did not leave me.