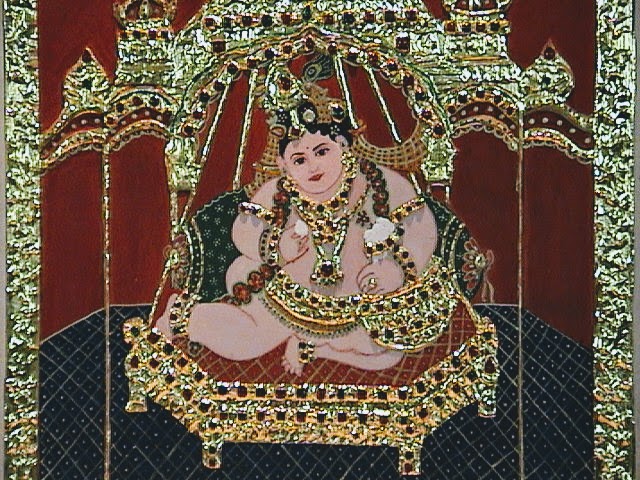 The Hindu festival season has begun which will run for about six months. The grand celebrations start in August for Nombu followed by Krsihna Jayanthi (aka Gokulashtami/Janmashtami) and ends in Pongal (mainly a harvest festival).

Each festival is dedicated to a particular God and with 3000 or so Gods you can have ten festivals a day. Krishna Jayanthi is celebrated as a birthday celebration of Lord Krishna the eighth avatar of Lord Vishnu. Each state has its own way of celebration. In Tamil Nadu, the celebration is in the evening. Lot of sweets and savouries are made. A rangoli depicting baby footsteps of Lord Krishna is laid out from the entrance of the house to where the deity is kept. Devotional songs are sung. After a prayer we all hog the sweets.

In their eternal wisdom our ancestors have decided the favorites dishes of The Gods. So it’s butter and Murukku for Lord Krishna, Modhak for Lord Ganesha (the Elephant God) etc.

What I like about the Hindu God is, He/She is not just an accountant who is waiting at the gate for your arrival, check your books of accounts on good and bad deeds and direct you to Heaven or Hell depending on which is more. Of course they maintain account and your actions may lead you to spend your after life in boiling oil tanks. But The God is also a Teacher (Goddess Saraswathi) ushers in wealth (Lord Lakshmi) a protector (Lord Muruga) and a playmate and lover (Lord Krishna) and a dozen others.

Lord Krishna is known for his flute, his mischievous deeds from stealing butter to snatching young women’s’ cloths when they are bathing and at a later stage he gives you invaluable lessons on how to lead a meaningful life (Bhagwat Gita).

There are thousands of songs written on Lord Krishna. The beauty of these 3 songs is, when you first listen to them you wonder if the composers have really seen Lord Krishna committing these acts and when you listen to them the second time, the mesmerizing voices of the singers confirm, indeed, the songs were composed while they were watching Lord Krishna arguing with his mother or defending his follies.

The explosion of cassette recorders and audio tapes market in the eighties made music available to everyone in India. You could listen from Boney M to Bhimsen Joshi, from ABBA to Anayampatti Dhandapani. Some of our earliest favorites were Anup Jalota’s Bhajans and Pankaj Udhas’ Ghazals. We used to call Pankaj Udhas ‘Annachi,’ an affectionate term for elder brother. That we did not understand Hindi or Urdu did not stop us from enjoying good music. My mother who spoke Hindi and Marathi always helped when we wanted to understand a particular stanza.

Coming to back to songs on Lord Krishna, some of our great musicians were ardent Krishna devotees like Pandit Hariprasad Chaurasia and Anup Jalota. It was said that Pandit Chaurasia played his Flute the entire night on Janmashtami.

Anup Jalota’s Bhajan Sandya became a huge hit with some songs on Lord Krishna and his Main Nahin Makhan Kayo (I did not eat the butter) became my all time favourite.

The Bhajan was composed by Surdas (late 15th and early 16th Century). Surdas played a huge role in the Bhakthi (devotion) movement in North India. His bhajans are sung across the country over the centuries. When I first listened to the song, I was struck by the simplicity of the conversation between Lord Krishna as a child and his mother. Lord Krishna as a child used to steal butter and neighbours used to complain to Yasodha (Krishna’s mother) and when she admonished him, he would spin some story and escape. Today, he was caught red-handed stealing butter in his own house.

At first he denies this totally, saying, “How could I have done this. You give me stick and ask me to herd the cows. I go in the morning and I come back in the evening.”

When that this does not work, he changes track and says, “look here! I am a chid and I have small arms and the butter is kept near the loft. How can I reach it?”

Yasodha, smiling, asks him how then the butter is on his lips. Taken aback for a moment, Krishna has a reply for this as well. The boys (other cowherds) chased me and plastered it on my mouth.

Just read the simplicity of the dialogues

Yeh chibo, kisi vidhi payo? (this container, how could I have reached it?)

Yasodha points to the butter on his lips and asks him how did it get there?

Maiya, yeh gwaal-baal, sab bair pada hain, bar-bus mukh laptayo (Mother, these herd-boys were all chasing after me, and they spread butter over my mouth.

Listen to the stanza now.

When this attempt fails, Krishna pretends to go on strike, saying he will not go herding cows from the next day. Yasodha does not look convinced.

So Krishna changes his tune and starts cajoling her, ‘you are my dearest’ ‘you gave me birth’ ‘you are so innocent.’

When this does not convince Yasodha, he shows anger and gets into emotional blackmail. He says, ‘today I have understood what is really in your heart. That’s because I am not yours. That’s why you are discriminating.’

This shocks Yasodha. She could not bear this. A trivial matter of butter has hurt her and him. So says you did not eat the butter.

kanaiya, tai nahin makhan khayo. (you did not eat the butter).

Lal-a more tai nahin makhan khayo (my little boy you did not eat the butter).

Both end up crying, both accepting that he did not eat the butter but fully aware he ate the butter. Krishna realizing Yasodha, his mother has acquiesced, there is no point in lying anymore and decides to tell the truth.

Here, Surdas plays with words at his best. The same words, Krishna used to say that he did not eat the butter, he now uses to convey he did eat the butter.

Main nahi makhan Khayo (I did not eat the butter).

The simplicity of words and the melody makes it one of the best bhajans on Lord Krishna and Anup Jalota with his melodious voice has made it a truly memorable one.

Listen to the first line, “Main Nahin Makhan Kayo”  to convey “I did not eat the butter.”

Now listen to the same words Mainahi Makhan Khayo spoken differently to convey “I did eat the butter.”

The next one is from one of the most famous singers in India, Yesudas. An exponent in Carnatic Music, a famous playback singer in Tamil, Hindi and other languages and well-known for his devotional songs on Lord Iyappa. His bhajans and songs on Lord Krishna is equally famous and my favourite is ‘Taye Yasoda.’

The song was composed by Oothukadu Vekata Subbiah Iyer or Oothukadu Venkata Kavi (ஊத்துக்காடு வேங்கட கவி) in the 18th Century. He was rightfully acknowledged as one of the greatest composers on Lord Krishna.

Taye Yasodha is again a conversation, but this one is between Yasodha, Krishna’s mother and a neighbour who is talking about Krishna. She talks about his mischief and there is an element of romance and her shyness to talk about it. And she ends up saying he is not just a child, he is Lord Vasudev.

The last stanza of the song is this

Yester day or the day before, he came home and showed many of his tricks. Then he asked for butter and pulled at my dupatta.

He is Vasudev. I pulled him and put him on my lap; When I was mesmerized looking at his beautiful face, he showed me all the universe.

Yashoda, this listen to magics pulled by your Gopala Krishnan. Yashoda listen the magics..

The last one is from Aruna Sayeeram, a famous singer of Carnatic Music. I believe, one of her most sought after song during Music Season in Chennai is, Maadu Meykkum Kanne (Dear Cowherd)..

Maadu Meykkum Kanne is also composed by Oothukadu Vekata Subbiah Iyer or Oothukadu Venkata Kavi (ஊத்துக்காடு வேங்கட கவி). The difference between the first song (Anup Jalota) and this one is, in the first song, Krishna complains that Yasoda is driving him to herd cows everyday; in this song, Yasoda asks him not go out but to stay at home. Krishna says he will definitely go and brags about his courage and capability. She cautions him that there would thieves and robbers and she is worried about his safety. Krishna says he cab beat everyone. She then says there wild animals roaming around in the Govardhan mountain and he replies, ‘seeing me, all the animals will come to me and I will hunt them.

When Nandagopar asks, where is the child, what should I tell him?

Krihna replies, “tell him I am playing ball with kids in the street. By the time you come searching for me, I will run and stand in front of you.

Listen to the last stanza now:

If you have seen Aruna Sayeeram singing this song in a concert or on TV, you would think she has definitely witnessed this conversation between Krishna and Yasodha. Such would be her expression, her eyes would expand in surprise, face brighten when she sings Lord Krishna bragging about his prowess.

I believe the artists who sang this songs brings so much life into them not just because of their devotion. It’s something beyond, a feeling of unision with the creator when they sing it.

All the songs are available (Anup Jalota’s Main Nahin Makhan Khayo, Yesudas’ Taye Yasodha and Aruna Sayeeram’s Maadu Meikkum Kanne) in apple music and other music websites. And of course on YouTube as well. Download them.  Play them in your car when you are starting on a long drive. Wear your mp3 player and go for an early morning walk/jog/run listening to these songs. Or just switch off all lights and listen when you go to bed. You will realize the eternity of these liliting ballads.