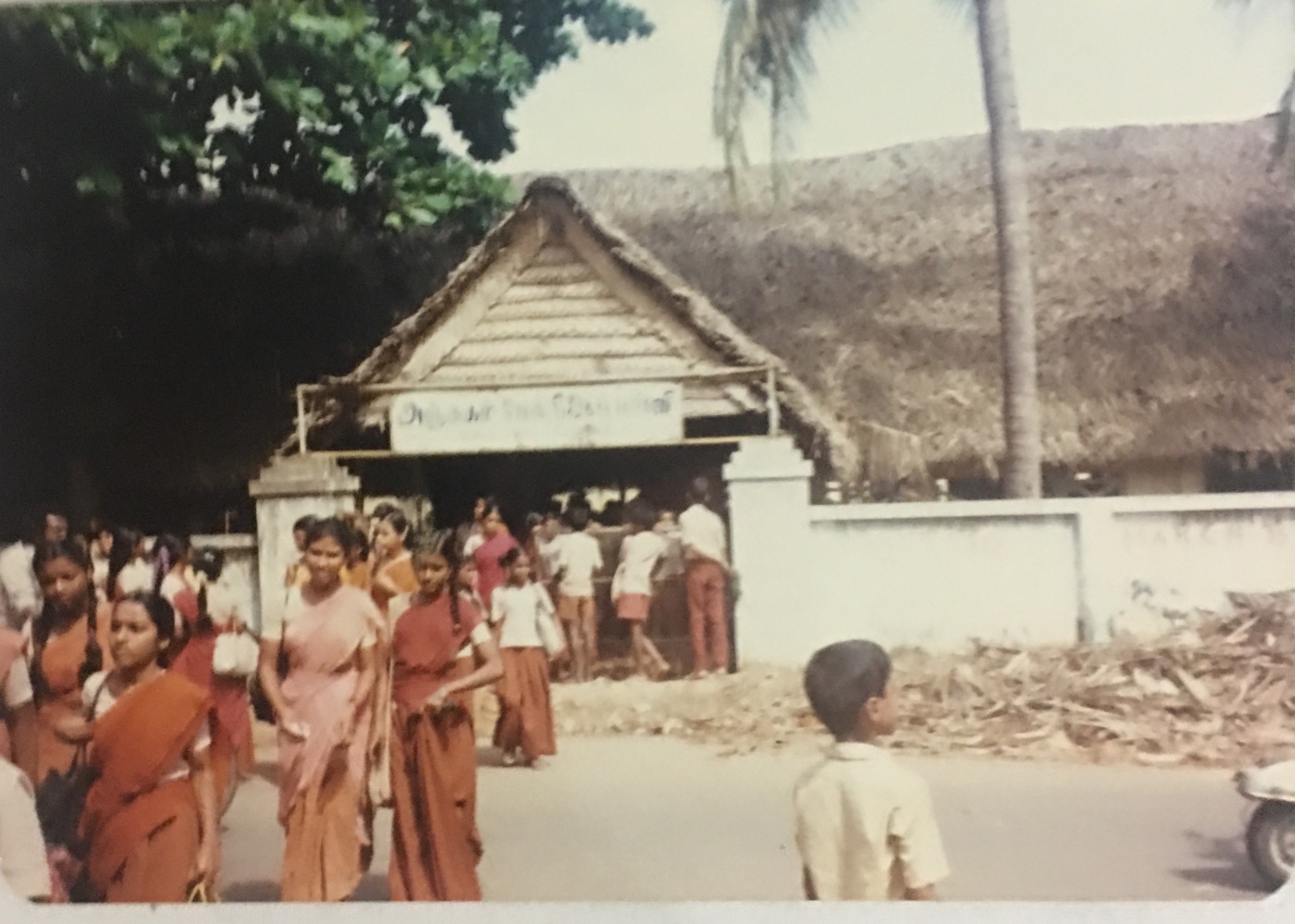 Two instances triggered this blog; the first one was a joke which came in WhatsApp which went something like this:

“Announcement in a SCHOOL

After 30 mins another announcement: “The 400 students who went to move 10 cycles plz come back to classes!”

SCHOOL LIFE AT ITS BEST☺

On seeing the message, Mohan my brother, asked me to write a blog on Gate Pass and Ms. Gitarni, our Headmistress in Anjuham High School.

The second one was, Mohan Ram (Eye Witness – Movie with Mohan Ram., VII A Vs VII C – My First Cricket Match) and I met a schoolmate of ours yesterday. Padmanabhan is busy Oncologist now and I was meeting him exactly after 40 years. The first thing we spoke about was about a Maths teacher whose nick name (Lizard – ஓணான்) but none of us were sure about his given name. The only given name struck in our mind after all these years, was the one we gave him. And of course we spoke about our great Headmistress.

When we moved to Madras in 1974 and settled in West Mambalam, the first thing our parents had to figure out was the school, they had to get the 4 children admitted. Our uncle suggested Anjuham School which till Ms. Gitarni took over was known for its notoriety.  Our cousins were already studying in the school and my father said they would help us to get familiarised in a new environment.

In just a few years after taking over, Ms. Gitarni, made the school one of most disciplined school in the city. She brought in discipline, motivated the teachers and ruled the school with an iron hand.

Our first taste of the great HM’s sermon was just before class VIII exams. The final exams for Class VIII was conducted at district or state level and she visited the class couple of times to tell us how difficult it would be to pass the exams and we should study hard even to get ‘pass marks.’ She instilled so much fear in us about the exams and said if we did not make the cut, our lives would be not worth living. Mohan Ram and I, though toppers in School, faintly discussed the possibility of committing suicide and the ways to do it (remember we were just 12 years old), if we were to fail the exams.

As I have mentioned in previous blogs, the school did not have a proper building (just huge huts for classrooms) and not even a playground. So there was no way the school was going to excel in sports. The only way to keep the school name going was a fair success in academics. This, she did with so much precision and incessant talks about ‘passing’ the exams. On the first day of the school, we were given a calendar and most of it was filled with dates for mid term and end of term exam dates. So we had to face an exam every 6 weeks and she made sure that she visited every class room to give a lecture why we should ‘pass’ the exams.

According to her, the greatest test in life was school final exams (SSLC/SSC) the ‘O’ Levels. Her sermons would start one year before in Class IX. She taught part of English syllabus in Class IX and spent most of the time explaining why passing SSC exams was the most important thing in life. Looking back, I don’t remember any of her teaching but only the lectures about ‘passing’ SSC exams.

Next to ‘pass’ was her obsession with ‘Gate Pass.’ She wanted to make sure the student were always inside the class and not wandering around. This, she ensured by introducing a pass (a token made in aluminium foil). Each class was given two such tokens, one to be the class teacher and the other with the leader (monitor) of the class. Any student who was outside his/her classroom during class hours, caught without a valid reason and a ‘gate pass’ was punished. He/she (mostly ‘He’) was made to stand outside her room for an hour and when she decided it was time to pardon the student, she did this after giving a stern lecture. The lecture included why discipline is important, how students like them are a disgrace to school with no discipline.  She caught at least two or three in a day during her rounds. The hapless students were caught even if they stood at earshot distance from their classrooms.

Yours truly was caught twice without ‘Gate Pass.’ I remember the second incident as if it happened only yesterday. We were in school final;  Mohan Ram and I went to invite a teacher who taught us in Class VII to our class to give a farewell address. The HM caught us on our way to the teacher’s class. Mohan Ram being the class leader, had one of the Gate Pass token with him. So I was asked to stand outside her cabin. She disliked me from the previous year (she did not like anyone talking in the class or talking back to her and I did both) and hence made me to stand more than the regular 40 minutes. Eventually she called me and lectured how I would end up as a  no-good. It did not matter that I studied well, I was doomed to be a failure in life.

I don’t remember any other school had this “Gate Pass” system those days or the school principles were as strict as Ms. Gitarni.

The school tradition had that the toppers were always given a character rating of ‘Excellent’ and in rare cases ‘good.’ But she gave me only ‘Satisfactory’ rating, probably the only topper in school history to get that not so coveted rating.

Apollos David sir, who caught us bunking class to watch a movie, Eye Witness – Movie with Mohan Ram. decided not to take it to Ms. Gitarni. She would have probably expelled me from school for that.

A few years later, I had to face her music again which turned out to be our last meeting. My brother Mohan who passed SSC, 4 years after me also topped the school. He was to get an admission for +2, (‘A’ level) in the same school. In the seventies, one had to copy the mark sheet and certificate and get it attested from a gazetted officer (a senior civil servant). By the time Mohan passed Class X, photocopying machines had come to India and one could get a copy of any document without someone having to ‘attest’ it. But the school insisted on ‘attesting’ the photocopy as well. I told Mohan to tell the school, that’s a stupid thing. After all, everyone in the school knew he was the topper. Mohan conveyed this to school administrator, who promptly informed the headmistress that I called her stupid.

To cut the long story short, his admission was kept in suspense and I was called to the school. Mohan came running and crying and told me his future was doomed and I rushed to the school for the rendezvous with Ms. Gitarni. She was at her furious best when I met her. Some good sense prevailed on me (a rarity in me those days). So instead of explaining how silly the school was by asking to attest a photocopy, I apologised to her and requested her not to punish my brother for my quote. She relented at last, but her final words, delivered in her trademark screeching tone are still ringing in my ears, “Even when you were in school, your remarks were always pungent.”

When I migrated to Pune, Maharashtra, I kept hearing the word ‘Naa pass or Naapass’ more often than not. The word ‘Naapass’ meant fail, – naa meaning ‘not’ and the English word pass. ‘Naapass Jhala’  was the oft used phrase. It was used as verb as well as an adjective. I could not understand why people would say ‘I got no pass’ instead of saying ‘I did not pass’ or just ‘I failed.’ It was used by everyone from elementary school student to college grads. It was the first of many quirky expressions I would get used to in Maharashtra in the initial years. Some of the acronyms they used sounded longer than the original word. But that’s another story for another day.

Ms. Gitarani who headed the school for close to two decades, made Anjuham School one of the finest in the city.  She was probably lucky that the school had excellent teachers during her tenure – Two Great Teachers. But it was her administrative skills, her determination to make the school a sought after one and the discipline she brought in, that made the school an outstanding one. Students like me who went on to become doctors, engineers, teachers, financial analysts, marketing gurus and a host of other professionals owe her a lot; her ‘Pass’ sermons and the ‘Gate Pass’ discipline.

This is my 50th blog in www.kaveripak.in and a big thanks to all the readers who motivate me to keep writing.