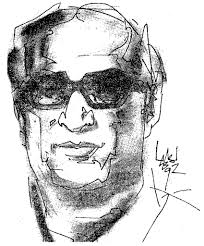 Couple of news items I read in the past weeks, reminded me of this story from Thi. Janakiraman. There was an hoarding from a leading daily newspaper wondering how politicians are not bothered about high price of petrol who always travel with an entourage of cars when the common man is driven to desperation whose meagre income is eroded with a hike in petrol prices everyday.

The second was a youtube clipping widely shared in WhatsApp group on how the Dutch Prime Minister is cleaning a coffee spill. If you have missed it, you can watch it here: Dutch PM Cleaning Coffee Spill.

We all remember how easily Swedish Prime Minister Olf Plame was assassinated when he was coming back home after watching a movie in the nearby cinema. He had no security and was walking back with his wife when he was killed.

When we see a video clipping on how Mrs. Merkal (German Chancellor) shops for bread in a nearby super market, we think why our politicians behave as if they are monarchs of this country and not just an elected representative.

Even a local MLA in India does not go anywhere without six Scorpios or Sumos following him.

The power keg seemed to have hit Indian politicians soon after the freedom. The story must have been written somewhere in the fifties not long after we got our independence.

A light read from Thi. Janakiraman, perhaps the finest writer in Tamil.

The King Who Attracted His Subjects

The airplane landed on the tarmac, glided on the runway and stopped. The airhostess announced, “We will stop for fifty minutes. Passengers who are continuing the journey can deplane, have some snacks in the transit lounge, rest and come back”. The Whiteman (all Caucasians are called Whiteman) got down from the plane and walked towards the transit lounge.

He looked through the glass wall. Heads! So many of them everywhere!

Ten thousand heads. Yes it won’t be less than ten thousand people. More and more cars were coming. Small cars, big cars, local and imported cars opened the doors, discharged people and proceeded to wait in the pool. Three hundred people in the front of the ten thousand people crowd are waiting with Rose Garlands in hands. They garland a heavyset man, wish him and go behind. The heavyset man is sunk now in garlands, his face and neck disappearing amidst flowers, and when the weight of the garlands become unbearable, he removes the garland one by one and hands them over to people standing next to him, without even looking at them. Another man helps him by removing three or four garlands at a time. Yet another group is coming and garlanding him now and once again the body disappears amidst the garlands and the face disappears now.

The shoulders sink under the weight of garlands now. The heavyset man removes the garlands by himself and with the help of few others and give to people standing next. Unchanged smile, handshakes and Namasté. Some people give the garlands to children and lift the children up to garland the heavyset man. Policeman, with laathis (laathi – a thin short stick) in hand control the crowd. People at the centre and back of the crowd jump up to catch a glimpse of the heavyset man. The garlands keep coming; adorning him and getting removed.

The Whiteman wonders it may take more than two hours for the heavyset man to go through all the garlands. He looks at his watch and realizes that half an hour has passed. The crowd picks up pace and start garlanding him every second and disappear now. And the slogan shouting starts;

“Conquer the world and come back”

“The hero of the country – spread your glory”

As hundreds of slogans like this were filling up the air, as the policemen are making path even as the crowd jostling behind him, the heavy set being exempt from ‘frisking’ by security, starts walking towards the aircraft. Five or six people are allowed to follow him.

The Whiteman and others subject their bodies for frisking, get the nod from security men and return to the aircraft. The slogans are still tearing the sky. The heavyset man is covered with rose petals everywhere: Coat-shirt-trouser-head-face-ears-eyelashes and shoulders. The crowd is insisting he wears at least two garlands.

“Who is this gentleman” the Whiteman asked the passenger walking next to him.

“I don’t know, may be some minister”.

“What! You don’t know? He looks like a big VIP” the Whiteman asks again

“I told you! May be a minister”

“He should be known if he is a minister”

“There are many states in this country. There are thirty to forty ministers in some states. If you add up there may be more than five hundred ministers. I have not counted. In old days, after graduation, to appear for public service commission (civil service) exams, we used to by heart the names of cabinet ministers, ministers of state, Seven Wonders of the World etc. Now I don’t have time”

“True! India is a big country’ The Whiteman acknowledges.

As they are talking and walking towards the aircraft, thousands of people break the security barrier and ran towards the plane shouting slogans again,

“The jewel of India, go in Sky Chariot”

Young men are shouting, the necks swelling and voice becoming hoarse. Some are jumping and shouting slogans.

The Whiteman climbs the stairs and sits in his seat. He looks through the window. He could see that the Airport authorities are advising the crowd and dispersing them so that the aircraft can move. At last the heavyset man, with rose petals all over his body, enters the aircraft. The airhostess guides him to his seat.

The Whiteman gets a surprise! The heavyset is sitting in the next seat to him.

The aircraft starts and takes off.

“The roses are beautiful with lovely smell’ the Whiteman appreciates the aroma of roses. The Indian heavyset man smiles and introduces himself.

“I am Pasupathinath. I am in politics for last thirteen years. I have been appointed as chairman of National Udad Dal Corporation” (Udad dal – black lentil, mainly grown in India & Pakistan and an important ingredient in cooking).

“Udad Dal is some kind of lentil, in black colour” the heavy set man explains, opens his brief case and brings out seven or eight packets. He opens one pours a spoonful of sample on the Whiteman hands and asks him to taste it.

“It’s full of protein. It has same amount of protein present in eggs, meat and chicken. Have you heard the names “Dosa, Idli, Vadai, Adai and kozhakattai”

“It’s OK if you have not heard those names” the heavyset man replies as he gives him a thenkuzhal (a snack made of rice and udad dal and deep fried in oil). “Eat this”

“In our country the vegetarians form South and North India eat these snacks for protein. I am making this trip to find out how we can export this lentil to other countries.”

The Whiteman says, “Good. I have understood you must be a Very Important Person. Thousands of people come to see you off. What a crowd! Hundreds of garlands!”

The heavyset men sighs. “hi hi hi. What use? It took the government thirteen years to understand. I gave one million dollars for election. Otherwise I would not have not even got the Udad Dal Corporation Chairman post”.

After flying for eight hours the plane lands in an airport. The heavyset men had ordered and drank whiskey and beer and offered the drinks to Whiteman as well. The Whiteman had taken one sip and went off to sleep.

Pasupathinathhas to travel further. The Whiteman says goodbye, “I have to deplane now”.

Pasupathinathtells the Whiteman, “I will come to transit lounge and look at your country from the lounge”. He walks with the Whiteman and asks suddenly, “what are you doing? Are you in business or government service? I was about to ask you but you slept off”.

“I am the Deputy Prime Minister of this country”

“Don’t get surprised. Our county is just one eighth of India. Population will be less than a thousandth”.

“Oh that is alright. You are saying you are Deputy Prime Minister but no one has come to welcome you?”

“No Police? No Security?”

“Why police should come to greet me?”

Pasupathinath,“Is your country not a democratic country?”

“They why no one has come to welcome you?”

“Because it is a democratic country! That’s why! Happy landings. Oh thanks again for offering me a drink!” The Deputy Prime Minister pauses for a moment and then introduces his secretary to Mr. Pasupathinath, “This is my personal secretary Mr Pasu. Happy landings again” he trails off.

“Democratic Country!! Poo” chuckles the chairman of Udad Dal Corporation as he enters the transit lounge.

Janakiraman(also known asThi Jaa, 28 February 1921 – 18 November 1983) is a Tamil writer from Tamil Nadu, India. He is considered one of the major figures of 20th century Tamil fiction.

He was born in a Tamil Brahmin (Iyer) family of Madras Presidency in 1921.[1] He worked as a civil servant. His writing included accounts of his travels in Japan and the Crimea.[2]The writing style of Thi Jaa is simple and narrative. His best-known novels are Mogamul, Sembaruthi, and Amma Vandhaal. All these novels have feminine feelings embedded in their subject. Though the story is spun around delicate feelings, the author’s narration is flawless and spontaneous. His short stories such as Langdadevi (a lame horse) and Mulmudi (Crown of Thorns) also follow the same style of writing. – Wikipedia