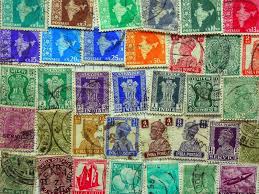 I have already introduced Sundara Ramasamy, a great Tamil short story writer to readers through the short story – Prasadam.

Su Ra’s Stamp Album is another story which will appear in my 100 best short stories. The writers brings out the emotions of young children brilliantly in this story.

Rajappa’s fame has diminished. The crowd was circling Nagarajan. Rajappa told all the boys that Nagarajan has become arrogant. But the other boys did not agree. Nagarajan was showing the stamp album sent by his uncle from Singapore. Till the first bell rang in the school, the boys looked at the album in awe. In the lunch interval, they looked at it again. They went in batches to his house and looked at the album. Nagarajan showed the album to everyone with lot of patience. His only condition was no one should touch the album. He would keep album on his lap and turn the pages and everyone could see it.

Now, no one talked about Rajappa’s album. His fame has indeed dimnished.

Rajappa’s album was famous in the students’ circle. Like a honeybee collected honey, he collected stamps. He was not interested in anything else. He would leave home early in the morning. He would visit all the friends who used to collect stamps. He would barter two Australia for one Finland. He would take two Pakistan and give one Russia. He would come back from school, throw the books at a corner, take Murukku (a snack) and fill it up in his pockets, drink coffee and start again. He would have got a tip that someone who lived four miles away, had just got a Canada stamp. He would run across the field munching the Murukku to reach his place.

His album was the biggest in the class. Thasildar’s son asked the album for twenty-five Rupees. Arrogance of money! He thought he could buy the album by throwing away money. Rajappa gave him a hot reply. “You have a beautiful baby at home. Can you give that for Thirty Rupees?” The boys clapped and whistled and agreed with him.

But there is no talk of his album now. Not only that. They compared the albums and declared that Nagarajan’s album has overshadowed his album.

Rajappa did not ask for Nagarajan’s album. But when the other boys were watching it, he looked at it from corner of his eye pretending he was not looking at it. Actually, the album was beautiful. The rare stamps which Rajappa had was not in that album. Even the numbers were less. But the album was breathtakingly beautiful. Even holding it in the hand was a proud thing. You can’t buy such an album in this town.

The following words were written in the first page of Nagarajan’s album. His uncle has written them and sent it.

Don’t be ashamed and steal this album. Look at the name written on the top. This Album is mine as long as the grass is green, lotus is red, the sun dawns in the east and sets in the west, this album is mine.

All the boys wrote these words in their albums. They also wrote this down in their note books and school books. Rajappa shouted at them, “why do you guys want to copy from him? Copy cats!”

No one replied but looked at Rajappa’s face. Only Krishnan could not take it.

“Go to hell. You are filled with jealousy!” he shouted at Rajappa.

“Have you got one stamp he has got? Only the Indonesia stamp is enough. It’s beautiful” Krishnan asked him.

“But he does not have the stamps I have” Rajappa replied.

“Show us one stamp which he has got!”

“Let him show the stamp I have. Ten rupees bet”

Rajappa understood there is no point in talking about his album anymore.

His album was the result of his toil. Collected one by one. An album from Singapore has made Nagarajan famous. The boys don’t understand the difference between the two. Even if he explains, the dud heads won’t understand.

Rajappa was brooding within himself. He was not even keen to go to school.

He was ashamed to see the other boys. Normally on Saturdays and Sundays he would go stamp hunting for hours. But this time around he did not leave his house. Every day he would look at his album hundreds of times. Even after going to bed, suddenly he would get up, go to his trunk box, open it, take the album out, look at it for some time and come back to his bed. Now he was getting irritated to see his album. He thought compared to Nagarajan’s album, his album was just a bunch of papads.

That day he went to Nagarajan’s house in the evening. He has come to a conclusion. He can’t take this shame any more.

Suddenly an album has appeared in Nagarajan’s hands. That’s all. He does not know the tricks of collecting stamps. He would not know the value of each stamp amongst serious collectors. He would be thinking only the big stamp or a stamp of big country has more value. He only an amateur. He can exchange some of his useless stamps for some goods stamps from him. He has tricked so many people in this. There are some tricks in this trade and he is a master in that. Nagarajan can be easily fooled.

Rajappa reached Nagarajan’s house and went upstairs. No one said anything as he used to go to his house often. He sat on Nagarajan’s desk. After some time, Nagarajan’s sister Kamatchi appeared and told said, “brother has gone to town on some urgent work and by the way did you see his album?”

“Isn’t it a beautiful album? Seems like no one has such a big album in the school?”

Rajappa was looking at the books on the table. Suddenly his hand struck the lock of the table drawer. He pulled the lock to see if it was indeed locked. It was. He looked up and saw the bunch of keys. He went near the stairs to look if anyone was around. Then he took the key and opened the lock. He could see the album on top of the drawer. He picked it up and read what was written on the first page. His heart was pumping hard. In a flash he inserted the album under his shirt inside the shorts. He locked the drawer, looked around and ran to his house.

Inside the house, he hid the album behind the book shelf. He came out. He was feeling hot all over. His throat ran dry. Blood flow to his face increased and pierced him all over the face.

At eight in the night, Appu from opposite house came to him. He was shaking his hands and legs and explained the matter. Nagarajan’s album is not to be found. He went with Nagarajan to town and when they came back, the album has just vanished.

Rajappa could not say anything, he just wanted Appu to go. After Appu left, he went back inside and locked the door. He took the album from the shelf. His hands froze. He was worried that someone may see him through the window with album. So he hid the album at the back of the shelf again.

He could not eat his dinner. His stomach got heavy. Everyone in the house asked him ‘what happened?’ He thought his face has become horrible.

He thought he would go to sleep. He picked up his mat. But sleep was eluding him. He thought someone might see the album in the shelf. So he picked it up and kept it under his pillow.

He did not remember when he fell asleep at last. In the morning he could not take the album from under the pillow as his mom and dad were constantly coming in and going out of the room. So he rolled the mat with the album and sat on top of it.

In the morning Appu came again. Rajappa was still sitting on the mat. Appu had been to Nagarajan’s house in the morning.

“Did you go to his house yesterday?” Appu asked him.

Rajappa’s stomach turned. He just nodded his head. He wanted Appu to take it as a suitable answer.

“After we went to town, only you went to his house, Kamatchi told us” Appu said.

Rajappa realized that they are doubting him.

“Nagarajan has been crying since yesterday night. His father might inform the police” commented Appu.

Rajappa did not answer.

“His father is working in DSP office no? He can bring the entire police force” said Appu again.

Fortunately, Appu’s brother came in and took him away.

Rajappa’s father also finished his breakfast and left for his office. The main door was locked.

Rajappa was sitting on the bed without doing anything. His heart was still thumping.

He was murmuring ‘police! Police!’ The main door was locked from inside.

Suddenly he heard a knock on the door.

The knock on the door was continuing.

His mom shouted, “hey look who’s at the door!” He felt his mom would open the door eventually.

He ran to the bathroom and locked the door. Water was boiling on the stove filled with small logs. He could see the logs burning heavily. He threw the album into the stove. The album burnt in seconds. All rare stamps and beautiful stamps. Tears fell from Rajappa’s eyes.

He could listen to his mom calling him, “hey finish your bath and come fast. Nagarajan is waiting for you.”

Rajappa removed his shorts and hung it on the cord. He wore a wet towel, came out of the bathroom and put on new pair of shorts and a shirt and went to meet Nagarajan.

Nagarajan was sitting on his desk. He started crying the moment he saw Rajappa. “My album is lost!” he said in a heavy voice. He was looking sad. His eyes told him that he must have cried a lot.

“Where did you keep it?” asked Rajappa.

“I remember keeping it inside the drawer under lock and key.”

Tears were flowing from his eyes. He turned his face away from Rajappa.

Rajappa went down and came back in a minute. He was holding his album in his hands.

“You are not serious” said Nagarajan.

Is it possible that Rajappa will part with his album? Can that happen? Nagarajan could not believe it. But Rajappa kept repeating it. His tone was becoming heavy.

“You don’t want even one stamp?”

“How will you live without your stamps?” asked Nagarajan.

“Why are you crying? You don’t have to give me yours. You have taken so much efforts to collect this” said Nagarajan.

“No. You keep it. Let it be with you. Take it and go home now” Rajappa shouted as he was crying.

Nagarajan could not understand anything. He took the album and came down.

Rajappa wiped his tears with his shirt and followed Nagarajan. Both came near the main door.

“Thanks a lot for giving me your album. Shall I go home now? asked Nagarajan as he began to get down the steps.

“Give me the album. I will see the entire album tonight and give it back tomorrow morning” said Rajappa.

“OK” said Nagarajan as he handed over the album.

Rajappa went upstairs and closed the door behind him. He hugged the album closed to his chest and started crying heavily. 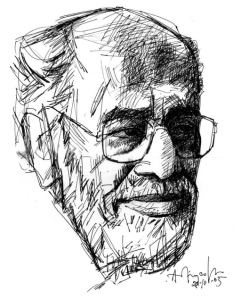 Ramaswamy was born on 30 May 1931, in Thazhuviya MahadevarKovil, (a village in Nagercoil). At 20, he began his literary career, translating Thakazhi Sivasankara Pillai‘s Malayalam novel, Thottiyude Makan into Tamil and writing his first short story, “Muthalum Mudivum”, which he published in Pudimaipithan Ninaivu Malar. He died on 15 October 2005 (IST) aged 74.