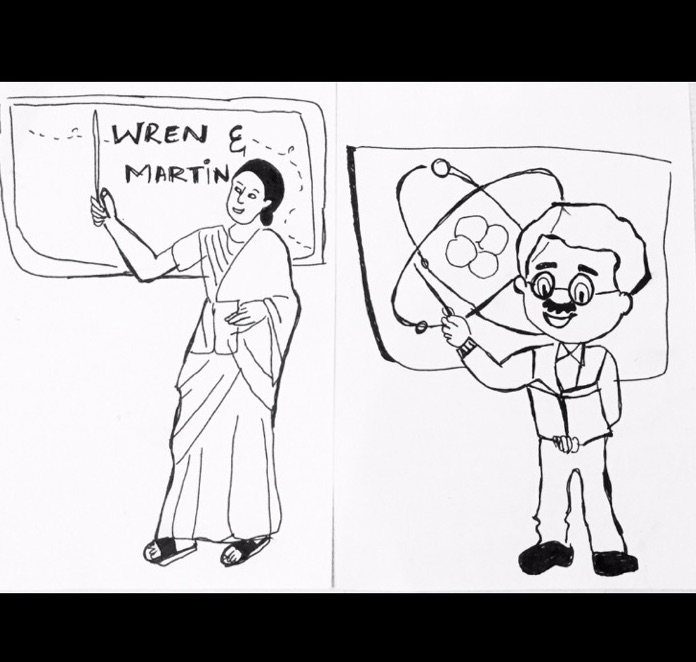 “A teacher affects eternity; he can never tell where his influence stops.”–  Henry Adams.

We have all had our share of good teachers and great ones. But we remember the great teachers who have inspired us and whose’ teachings continue to inspire us throughout our lives.

I have been privileged to have some of the greatest teachers throughout my school and college days. The first teachers who inspired me are two of my primary school teachers. As I have mentioned in my last blog, I studied in a Government Panchayat Union School. But teachers in those days, had passion towards their profession and worked very hard for a pittance. The lives of Teachers is hard and that’s just not in India. Many years back, I read a column by Art Buchwald, which was about how tough teachers lives are even in the Land of Opportunities: “Night School at the Local Restaurant.”

And teachers have to be patient as well. My wife comes from a family of teachers. Her mother was a much loved teacher and father an admired football coach. Renuka teaches art and craft to young children and it requires great deal of patience to keep your nerve when a dozen kids shout constantly ‘Aunty! Aunty!’ on top of their voice.

Two teachers both named ‘Parimala’ taught me a lot in the primary school in Kaveripakkam. One of them gifted me a book titled – உலகப் பெரியார்கள் – ‘The Great People of the World’ when I was about 9 years old in Class IV. The book had two page essays on great leaders like Mahatma Gandhi, Napoleon, Nelson, Giuseppe Garibaldi, Jone of Arc and many others. I would have read the book hundreds of times. during my school days. I read about how Nelson, who was a short man fought some of the great wars, how Napoleon, apart from being a great warrior, helped to write the ‘Napoleonic Code’ which is considered the best ‘Civil Law’ code ever written.

My favourite was Joan of Arc, a french warrior during the Hundred Years’ War. It was said, when she was burnt at stake, her whole body burnt except the heart. For a young kid, it was inspirational and it probably kindled my passion in reading books. The two ‘Parimala’ teachers recommended me for a double promotion which did not materialize as the Government had stopped the practice by then.

We (3 brothers and sister) then moved to Chennai for high school – Anjuham High School, West Mambalam and were fortunate to have some of the best teachers. This blog is about the two great teachers who helped us to shape our lives.

The first was Santha Teacher. She did not actually teach any of us. Probably she taught history to my sister for a year – but I am not sure about. She was our neighbor who taught in the same school where we studied. She gave us free tuitions but more importantly helped us in learning good things in life. JK and I used to read morning paper ‘The Hindu’ at her place and I would struggle with most of the words in Jack Fingleton‘s report on cricket. Just to reiterate we were studying in Tamil (my mother tongue) Medium School and English was just one of the subjects taught and not medium of instruction. She would explain the meaning of the words and how to use them in sentences and introduced us to Wren & Martin, the Grammar Book. She taught social sciences in school and used to narrate the turning points in world history. My interest in History is entirely because of her.

When my parents were wondering if my sister should go to college (it was a more of a financial decision, as three other kids would soon follow her to college), it was Santha Teacher who firmly advised my mother that my sister should become at least a graduate. She told my mom, “Saroja! your financial woes will not change if Vasanthy is not going to college. But it will decide her future.” My mom took her advise and my sister graduated in Science and now works as an officer in a leading Central Government Research Institute. Santha Teacher was a mentor and wise counsellor.

Though retired many years ago, she still works with students and helps the needy ones with financial support. Her memory is still sharp. My friend Dr Mohan Ram and I met her a few months ago. Dr Mohan was meeting her after many years. The first question she asked him was, “How are your brothers Sriram and Srinivas?” Mohan was dumbstruck. Because his eldest brother Sriram left school in 1975 and Srinivas in 1977 and never saw the teacher afterwards. And the teacher was asking about them after 40 years as if they have left the school only last year.

A Great Teacher and an Inspiration, Santha Teacher with my brother Mohan (L) and with Dr Mohan and me (R).

She once helped me write an essay ‘My Future Profession – A Teacher.’ She said a teacher needs to have compassion and catholicity. It took years for me to understand how compassionate she was and Catholicity also could explain her middle name- N C Santha. A great teacher and an inspiration.

The second teacher was Mr Apollos David. While Santha Teacher was quite (as her name would suggest (Santham means quite and peace), Apollos David was a vivacious and bubbly personality and connected with students as a friend. He taught us physics for two years and was a very good teacher, who kindled interest in science. He would call a student ‘Scientist’ if the student gave correct answer to a tough question. He said this would help the students to be attentive in class and hoped someone will go on to become one. And there was a competition amongst students to earn the tag. He would pull the student, harmlessly of course, if the student gave an incorrect answer hoping to earn the ‘Scientist’ tag. Mohan Ram and few others got the tag in the two years including yours truly – once.

During our final year at school, Mohan Ram and I got caught after bunking the school to watch a movie and he gave us good hiding. You can read the story here: Eye Witness – Movie with Mohan Ram.

What amazed the students was his proficiency in Tamil and English. He was the first one I met who had a good command over both languages. He conducted the annual functions at the school and gave brilliant speeches with hilarious anecdotes. He became a rockstar amongst students and whenever we met the old students they would invariable ask “How is Apollos David Sir?”

He was definitely my favourite teacher at school and I would talk to him on subjects other than Physics. He could quote from Kamba Ramayanam (a Tamil Epic written in the 12th Century) as well as Hamlet (Shakesphere). When I asked him how did he develop command over two languages, he would say, “Tamil is my mother tongue so I was lucky to learn the great language and I love English Poetry so I studied Shakesphere.” For a graduate in Science, to get mastery over two languages was phenomenal.

He was very soft spoken and his Thirunelveli Tamil slang was very sweet. We once taped his lecture in class and he heard about it, he was thrilled and spoke a few lines on the tape. As it was customary to get autographs from teachers during school final year, we all were eager to take his autograph. On my book he wrote;

Roughly translates as “Let the sharpness of your intellect, pierce the darkness of ignorance.”

I wanted a poem from him and went to meet him in the staff room. He was reluctant at first but when I persisted, relented a bit. He modified one of Bharathiar‘s (famous Tamil Poet and Freedom Fighter) and wrote a poem. For people who have not read the original poem, I am giving the original poem first.

The meaning, prima facie, is very simple. The poet says, “I found a small flame and placed it in the hole in a tree. The whole forest burned and turned into ashes. Is there any difference in the ferocity of the fire whether it is young or mature?” But it has deeper connotations and you can read it here.

I don’t remember the exact words he wrote but what sir wrote in my book was something close to this. After all, it’s close to 40 years now and I certainly don’t have my teachers’ memory power.

The first lines are same as the poem; “I found a small flame and placed it in the hole in a tree. The whole forest burned and turned into ashes.” He changed the last line to say, “Just like the forest fire, your knowledge will grow smashing obstacles.”

Of course I have not done justice to the faith he had in me. But I considered him as my role model and worked hard to gain a reasonable proficiency in Tamil & English.

Unfortunately I could not get in touch with him after I left school though I used to hear about him first from my younger brothers and later from friends which also stopped after I migrated out of Chennai.

When Dr Mohan & I met him

The Rockstar and the Role Model, Apollos Sir at School Function (L). During our meeting in January 2017 (R).

Few months back, on the day we met Santha Teacher, we also caught up with Apollos Sir. When I called him to fix an appointment, he could not recollect my name but welcomed me to come over. When we met him, we understood that he was not keeping well and he just postponed a visit to the hospital to meet us. We explained to him the class, the tapes and his quotes and he slowly remembered teaching us. He spoke with lot of enthusiasm and was very proud with his students achievements.

Last night I received a message in our WhatsApp group that he passed away the previous night. I was saddened to know that one of the greatest teachers to whom I was privileged to be a student of, has passed away. A small consolation is, I could meet my School Rockstar and my role model recently.