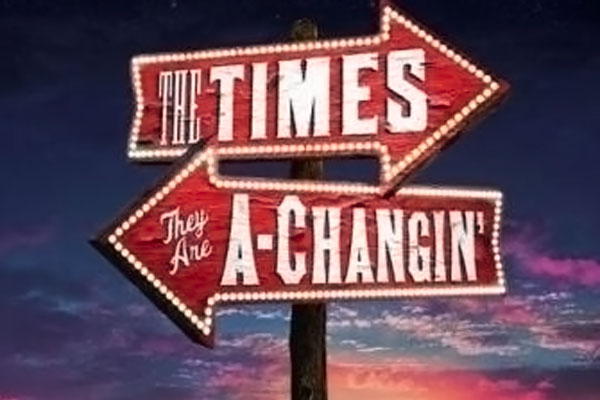 My apologies to readers if they thought the blog is about Nobel Laureate Bob Dylan or Rock or Folk Music. I have already written a blog about my knowledge about Pop Music. This is about the change that’s happening in India. We will get there in a bit.

I have couple of News Apps in my iPhone and 90% of all the news stories I read make me think why our Newspapers don’t get to publish anything that’s happening for good in India. It was all the more frustrating as my wife and I returned from Abu Dhabi after more than a years stay there. In UAE (Gulf Times/Khaleej Times) and in Singapore (Straight Times) you only get to read how good the city and the Nation State is. And you come back you read nothing but bad news.

I don’t belong to the skeptical group. I believe a constant change for good is happening all over the country. Yes we could have been much better and close to China if we only had good policies and better governance. If only…

Anyone who has gone to a Government Office to get a ration card or a passport or a driving license would have faced horrors of unimaginable scale. You would have no clue where to start, how to go about it and the sheer design of the office would give you creeps and the staff would treat you like – to put it mildly – shit. Without an agent and without a bribe you won’t get anything done.

Recently this WhatsApp message was posted in my group. An Oxymoron is defined as a phrase in which two words of opposite meanings are brought together….
Here are some funny oxymoron’s :
1) Clearly Misunderstood.
2) Exact Estimate.
3) Small Crowd.
4) Act Naturally.
5) Found Missing.
6) Fully Empty.
7) Pretty Ugly.
8) Seriously Funny.
9) Only Choice.
10) Original Copies…

Well you could have added bribe less Government Office as one of them. Government office meant bribe and it would be a dream to take it off the list.

Three instances in the last 3 months have made me realize that our Government services are getting better. The first instance was renewing my wife’s passport. She just logged on to the Passport Website, filled up the form, paid the fees, took an appointment. On the allotted day, she just went 15 minutes prior to appointment and the process was over within an hour. Her new Passport came in 10 days. No queue, no agent, no going from pillar to post and no cash. Some cynics would still say this is no great deal. The entire process is outsourced. How does it matter? You get top class service and the fees is quite reasonable.

Well if that was a pleasant change, my License renewal went a step further. I went to the RTO office (Road Transport Office) near Toli Chowki and requested for a License renewal. The clerk told me the process has changed and I need to apply for an online appointment, pay the fees in eSeva (a place where you can make payments for your state utilities bills and property tax). I was not carrying my laptop. I just went to the shop nearby and the guy went online and got me an appointment for the same day. He printed a confirmation sheet and asked me to pay the fee in nearest eSeva. It was about a kilo meter away. The eSeva center was spacious with seating arrangement for visitors. I paid the fee using my Credit Card (who says digital economy is not moving forward) and got the receipt. I went back to RTO office and got my medical form filled and signed by a Doctor. I went inside and handed over the forms and receipt. The clerk took a photo and got my biometrics (thumb impression) and asked me to sign with a digital pen. He said it would take 3 days for the License to get ready. I explained to him that I would be traveling and it would be helpful if he can deliver the license on the same day. After some hesitation he told me to come back and collect it at 4.30 PM. And yes, at 4.30 PM I went and collected the License. No queues and no hassles and more importantly NO CASH. I could not believe that it was happening in India.

So when it came to renewing RC (Registration Certificate) of my Bike, I decided I will get this done without any third party help. The RTO, (Regional Transport Office) gives roadworthy certificate for vehicles (Motor Cars and two wheelers) for 15 years after which you need to renew it. It can be a nightmare as the fitness of the vehicle can be rejected for any number of reasons (obviously this was for making money).  I also wanted to change the address mentioned in the old RC book. I logged on to Telangana Transport Website and checked what all I needed to get this done. Their website is very user friendly and I was informed that I needed the following:

I got my vehicle serviced, changed the tyres and got the insurance renewed for the next year. I got the PUC certificate and logged on to the website for an appointment. I got the slot for 11 AM on 31st and I filled the details. I was asked to pay the required fee online.

So I went to the RTO (Road Transport Office) near my home at 11 AM and was told that I need to go to another RTO which was 18 Kilo Meters away. I told them I would miss the appointment. They said, “Don’t worry sir. They will accept the form till 2 PM.” I rushed there and managed to reach by quarter past 12. It was just like any other Government Office with 6 counters and no information on any of them. I chose a counter randomly and waited in the queue. Surprisingly there were not many people. When my turn came, the clerk told me to go to Counter No -3. I went there waited again. When I handed over the papers the lady clerk informed me that I should fill up form 24 (Registration Renewal) and Form 33 (Change of Address). I asked her where can I get them. She said I can get it from any shop outside. I got the forms filled them and stood in the queue again. She input the details in her computer and asked if I have provided proof for change of address. I said yes and asked her to change my name as well to match it with Aadhaar (National Identity Card). She filled in the details and asked me to go to another counter for photo and signature and then for vehicle inspection.

I completed the photo session (the new RC Books in Telangana State comes with your photo affixed) and went for vehicle inspection. Another clerk asked me to get the Chassis Number Stenciled on the Form and wait for the officer’s inspection. The officer appeared in few minutes and asked me if my vehicle is in good condition. I said, “Yes sir. I just spent 10,000 Rs (about 150 USD). He shot back, “You would not have maintained the vehicle in good condition all these years!” I smiled and told him, “No Sir. I changed  the tyres, tuned it completely and I am planning to take it on a long ride.” He asked his assistant to check the Engine Number and Chassis Number and if they are matching with the numbers I filled in. Then he went on to check few other vehicles, summarily rejecting  the ones that were not meeting the RTO requirements.

I waited for another 20 minutes and the clerk gave me the papers and asked to meet the Chief Officer again – a Mr. Reddy (probably an officer with deputy commissioner rank). I went to him and smiled. He asked me to take a seat. Never one to leave the opportunity for a conversation, I started talking about my passion for two wheelers, my adventures on bike including the coastal drive I did two years ago. He was a bike enthusiast himself and talked about his vehicle collection. He talked about his travel across India in Bike and Car. He then asked me if I wear proper gear on my road trips. I said yes and showed him my Italian Helmet. 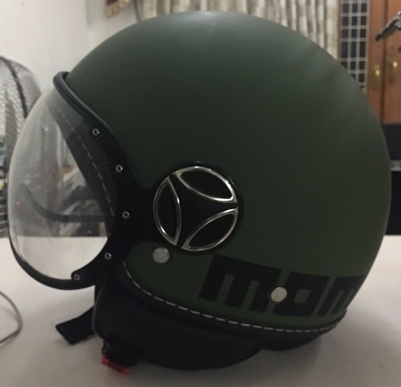 He was amazed by the design. An assistant asked him, “Sir what would be the price of this?” He answered it should be between 15 to 20,000 Rs which was true. I paid about 200 Euros for the helmet. Before signing the papers he asked me to spread awareness about road safety among young riders and asked me to promise him that I would make at least 100 youngsters wear helmet. I assured him that I would definitely spread awareness on road safety and complemented him on the new system RTO is following and told him it would have been better if I could have downloaded the Forms from the website instead of running around after reaching the RTO. He said they are definitely available in the website and I missed seeing them. When I said this is probably the best RTO in the country, he smiled and said, “Yes Sir. We have gone totally cashless.  We are No-1 in the country and Andhra Pradesh is No-2!”. I could not agree with him more. He signed the papers and asked me to submit them in the same counter and my new RC book would be delivered in two weeks time. He was one of the best Government officers I have come across.

Now, imagine a Government Officer telling you that they run their office Cashless. It was music to my ears.

I did observe the office itself has not changed. They still have pigeonholes as counters. Customers need to stand outside in rains or the merciless Hyderabad sun. Inside the office there is poor ventilation and just about enough lighting. I hope they will change as well in the years to come. Agents were still helping customers and making some nuisance by jumping the queue.

As I was coming out on my bike, I could not stop comparing these Government office experiences with what I faced in VFS Global a few months back. VFS is a Visa Facilitating Service and they help with issuing visas for travel to USA, UK or Europe. Everyone in VFS, from the security guard to the people at the counter behave like they are the Visa officers and more often than not treat customers with contempt. And we don’t see anyone writing about their service or attitude. But of course they are helping you achieve the ultimate Indian dream – getting out of the country to live in an Utopia!!

Anyone who has watched the movie Indian would recall the corruption at RTO which was the subject of the film. Well Shankar should be happy to note the changes that’s happening in RTO.

I am not for a moment suggesting that there is no corruption anymore in Indai. But slowly and steadily there is a change for the better. The Millennial generation would probably live to see a customer friendly, totally cashless India. Yes, Times, they are definitely a changin’

4 thoughts on “The Times They Are A Changin’”